Bigger, bolder and more intimidating than ever before…

TUSK DAY is nigh.

Terrorising his way from village to village this uncharitable beast consumes the souls of his victims leaving behind nothing but ashen ghost towns. If you’re lucky enough to catch a glimpse of the IIPA you will know he is without forgiveness.

The 10.8% IIPA will emerge into the wilderness FRIDAY 7th APRIL where he will be kegged and tapped to a few venues in Perth.

Whilst the WA villagers inflict their vengeance, the Feral crew work hard to ship fresh kegs across the nullabour in refrigerated trucks to ensure the East Coast get their share of the action. 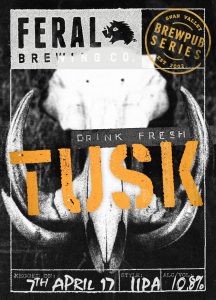 Back in 2005, when you could barely find an American IPA brewed in Australia, we decided to release a mighty beer named TUSK. A massive 9.8% Imperial IPA that pushed the boundaries of what people considered drinkable at the time.

Deemed a menace to society, we coaxed Tusk into a deep sleep, hibernating for close to 6 years. Although distant in Brendan and Will’s mind, they waited long and patiently to release Tusk from his chamber of silence.

September 2013 Tusk awoke from his slumber. The ice age of domestic bland beer had started to melt and the people rejoiced welcoming Tusk with open mouths.

For too long the Australian community suffered from aged oxidised and imported versions of the heavily hopped style. It was time to push back. Reborn, we shipped the Imperial IPA across Australia promoting the ultimate in fresh Australian hand-crafted beer.

Now a bi-yearly release, our brewery team work hard to deliver the freshest Tusk from tank to kegs to glass all over Australia. He is kegged off and delivered fresh from the Swan Valley direct to a couple lucky venues across Perth, all in a day’s work. Whilst the folks of Perth squeal about sighing in delight, the Feral crew continue tirelessly to move the beer across the hot and dry Nulla-boar in refrigerated trucks to ensure our Eastern Coast friends enjoy a fresh drop of Tusk just days after being kegged.

Runt is in Can!

See all news and events